The traditional method for proving program termination consists in inferring a ranking function. In many cases (i.e. programs with unbounded non-determinism), a single ranking function over natural numbers is not sufficient. Hence, we propose a new abstract domain to automatically infer ranking functions over ordinals.

We have implemented a prototype static analyzer for a while-language by instantiating our domain using affine functions as polynomial coefficients. We successfully analyzed small but intricate examples that are out of the reach of existing methods.

To our knowledge this is the first abstract domain able to reason about ordinals. Handling ordinals leads to a powerful approach for proving termination of imperative programs, which in particular subsumes existing techniques based on lexicographic ranking functions. 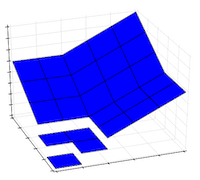